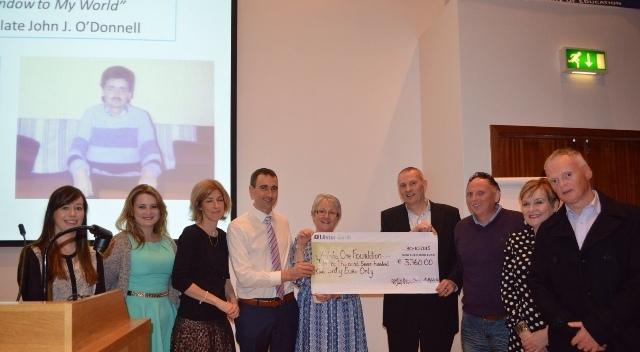 The Annual Alpha-1 Patient Conference took place again this year in the Marino Institute of Education in Drumcondra in Dublin on Friday 30th of October. Over 70 Alphas and their family members attended making it by far the biggest patient conference to date.

Tea, coffee and scones started the morning which were much appreciated, particularly by delegates who had travelled long distances to attend, for example the O’Donnell family from Donegal who were on the road since 5am.

After refreshments, the conference was opened by Mr Tommie Gorman, RTÉ Northern Editor and patient advocate.  Tommie spoke movingly about being diagnosed with a rare form of cancer in 1994, his battle with the condition, and how it has given him a fresh perspective on life.  He imagined what it would be like to be diagnosed with cancer or Alpha-1 in the 1970s, when there were no services, limited treatment options, and no patient support groups with the result that patients were seen and not heard.  He detailed how so much has changed for the better in cancer; treatments, services, but in particular how patients are being listened to and how the model of healthcare was gradually changing to a more inclusive partnership model.  Tommie then drew parallels between his journey with cancer and those diagnosed with Alpha-1.  For example, both are chronic conditions that can be managed with improved drugs, better lifestyle choices (for example alcohol avoidance in Tommie’s case, smoking avoidance in the case of Alpha-1) and new treatment ideas.  It may be hard to see any positives in the days, weeks and months after a diagnosis of cancer, but Tommie outlined how he has learned “not to worry about the small stuff”, and how he has learned to treasure family and friends. 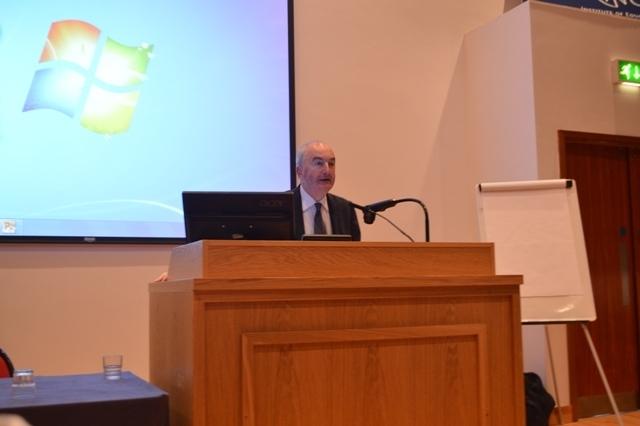 Next speaker was Professor Gerry McElvaney who gave an excellent synopsis of current and future clinical research into Alpha-1 including the positive results of the recently completed RAPID study (also known as the ZEMAIRA study).  This study which included 22 Irish Alpha-1 patients assessed the efficacy and safety of augmentation therapy for Alpha-1.  The results of this study have clearly shown that receiving purified alpha-1 antitrypsin protein slows down emphysema progression; in short it has a disease-modifying effect.  Unfortunately, this is an expensive therapy and we have to wait for a cost benefit assessment by government bodies before it is considered for free access for our patients. The patient voice will be very important in this process. 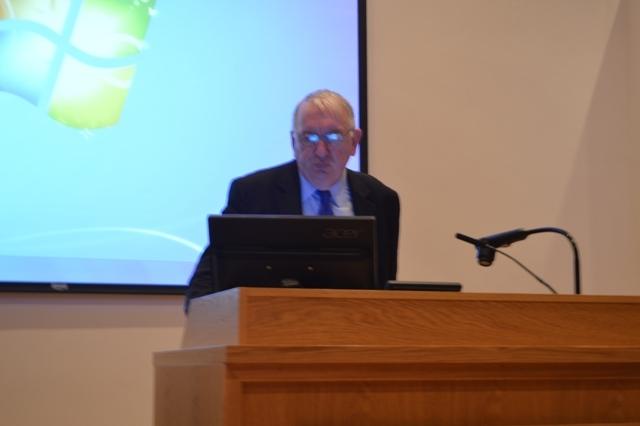 Ms. Karen Redmond, cardiothoracic surgeon in the Lung Transplant Unit in the Mater Hospital then discussed lung transplants in Ireland which are increasing year on year and spoke on new surgical initiatives which are helping to improve outcomes.  The lung transplant programme in the Mater has been a tremendous success story since it began in 2005, with over 120 transplants performed.  Before 2005 Irish people had to travel to the UK for lung transplant.  This is a difficult topic but Karen helped to demystify lung transplant for the audience, particularly for those who are being assessed for transplant.

Next up was Dr. Gianpiero Cavalleri, a senior lecturer in human genetics in RCSI who spoke about DNA and how changes in DNA (mutations) can have a positive, negative or even neutral effect and may or may not be inherited by later generations.  He spoke about genetic diversity in Ireland, the genes the first Irish people carried, how genetic variations can be found at different frequencies in different populations, and how DNA can tell us where people originally come from.  The discussion on the genetics of European people was fascinating, and Dr. Cavelleri outlined his DNA Atlas Ireland project which is trying to build a map of Ireland based on the genes people carry (www.familyhistory.ie). 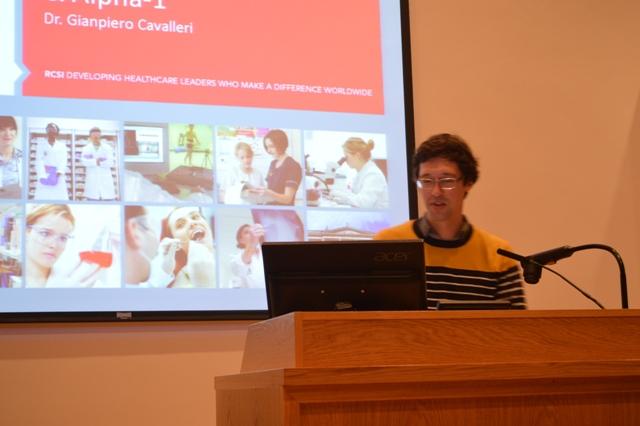 Dr. Tomás Carroll and Laura Fee next spoke about the wider activities of the Alpha One Foundation. Tomás discussed Alpha-1 itself, how it is caused, and our core activity which is providing a free blood test for Alpha-1 as part of the National Alpha-1 Targeted Detection Programme.  At the moment over 200 people are being tested for Alpha-1 per month.  These people have blood taken in over 30 different hospitals, the blood sample is sent to the Alpha One Foundation who carry out the test and return the result to the requesting doctor.  If someone is diagnosed with Alpha-1, their doctor is offered the opportunity to refer the person to the specialist Alpha-1 clinic in Beaumont Hospital to see Professor McElvaney.  Laura then outlined a variety of other activities including awareness and health promotion initiatives, the partnerships we have with other organisations such as COPD Support Ireland and the Irish Lung Health Alliance, our Annual Report and its importance, and how people can find out more information on Alpha-1 (www.alpha1.ie, Facebook, etc.).  Laura highlighted that to raise Alpha-1 awareness we target hospital laboratories, doctors and nurses, the public, and finally patient support groups, for example COPD Support Ireland local support groups (see www.copd.ie to find your local group).  Targeting these groups involves presenting about Alpha-1 at various hospitals, conferences, and patient meetings.  Finally, Laura discussed the importance of fundraising, thanked the people involved, and detailed the important equipment for Alpha-1 testing this has allowed us to buy.

Just before lunch Dr. Emer Reeves, RCSI gave an excellent synopsis of current research being undertaken into Alpha-1 in the respiratory laboratory in Beaumont Hospital. She spoke about the core areas of research currently being carried out in the laboratory including inflammation associated with Alpha-1 and the role the alpha-1 antitrypsin protein plays in inflammation. Emer outlined the importance of patient involvement in this type of research, why patients may be asked to take part and how this research called ‘translational’ research can lead to new treatments and better outcomes for patients.  The best translational research comes from a partnership between patients, doctors, and scientists. 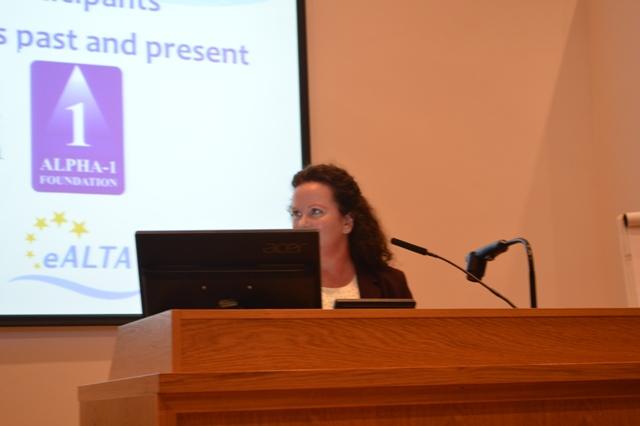 After an enjoyable lunch members of the O’Donnell family recited 2 poems written by their late brother John who passed away at the age of 26 from lung disease related to Alpha-1.  Despite his young age, John wrote over 100 poems and John’s former teacher Mary Turley-McGrath gave us an insight into how talented he was.  John’s sister Sheila also spoke about how publishing the book had brought the family closer together and helped the family remember their special big brother.  An incredible 400 people turned up to the book launch in Manorcunningham in late August, articles on John’s book appeared in 5 different newspapers, and John’s sister Anne was interviewed on Highland Radio in Donegal.  A huge thank you to the O’Donnell family for involving the Alpha One Foundation in this special project and for raising funds and awareness of Alpha-1 in Donegal.  John’s amazing poetry has been published in the book “Window to my World” and many copies of his book were sold on the day.  If anyone would like to buy copies of this inspirational book, do let us know. 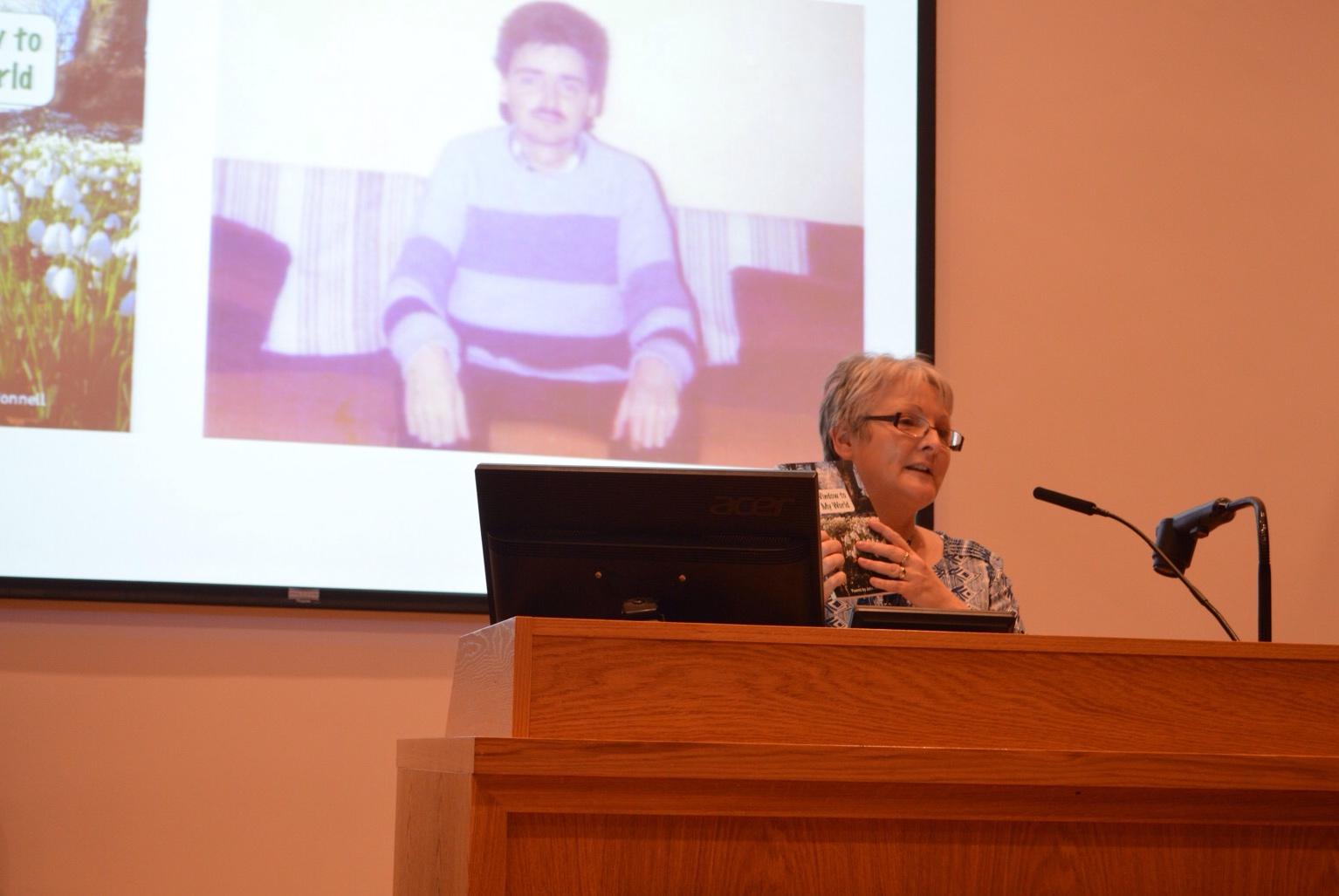 Next to speak was Dr. Annemarie Broderick, consultant paediatric gastroenterologist in Our Lady’s Children’s Hospital, Crumlin who discussed Alpha-1 related liver disease, specifically in children. The alpha-1 antitrypsin protein is made in the liver and is meant to leave the liver and enter the bloodstream.  Once in the blood it travels to the lungs and forms a protective shield.  However in people with Alpha-1 this protein is made incorrectly and may subsequently get ‘stuck’ in the liver. This may result in liver disease.  Dr. Broderick spoke about clinical presentation, treatments and outcomes for those with Alpha-1 related liver disease.  Arising from this presentation, the Alpha One Foundation is visiting Dr. Broderick and her colleagues in Crumlin at the end of November to highlight services we can provide and discuss areas where we can work together. 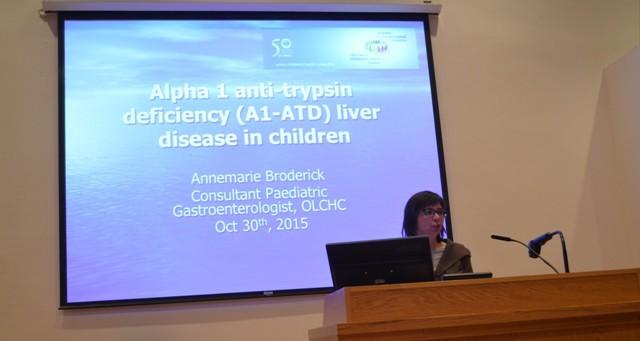 The final presentation of the day was from Eóin Durkan from the School of Health and Human Performance, Dublin City University (DCU).  Eóin has just started his PhD in DCU in collaboration with the Alpha One Foundation and the Irish Research Council.  His research project will examine the use of exercise in the treatment of individuals with Alpha-1 and COPD.  Eóin’s goal is to set up an effective pulmonary rehabilitation programme tailored for people with Alpha-1.  He is a strong believer in exercise as medicine and enthusiastic about the potential of exercise as a therapy for lung conditions. Dr. Noel McCaffrey from DCU (ex-Dublin footballer and All-Ireland winner) then took over to give a demonstration of the type of exercise class that will be available as part of Eóin’s project.  After a day spent sitting down, Noel got everyone moving, sweating and laughing.  If you wish to participate in this exciting new project or find out more before deciding, contact Eóin by email eoin.durkan@dcu.ie or call 01-7008470. 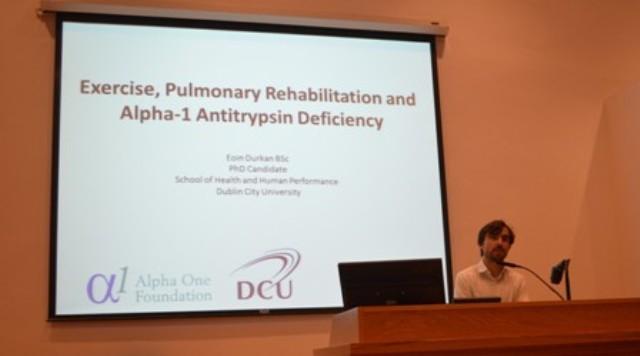 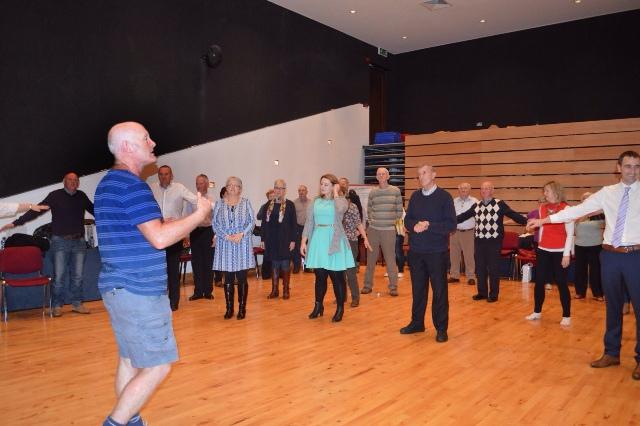 More photos of the enjoyable day are posted on our Facebook page. A big thank you to all of our speakers who kindly took time out of their very busy schedules to come and present.  Thanks also to Orla Keane and Josephine McGuirk who helped out on the day with registration and Christmas cards.  Finally, thanks to everyone who attended and for your feedback which has been excellent.  If anyone would like to suggest topics or ideas for next years conference do let us know (telephone: 01-8093871 or email: alpha1@rcsi.ie). 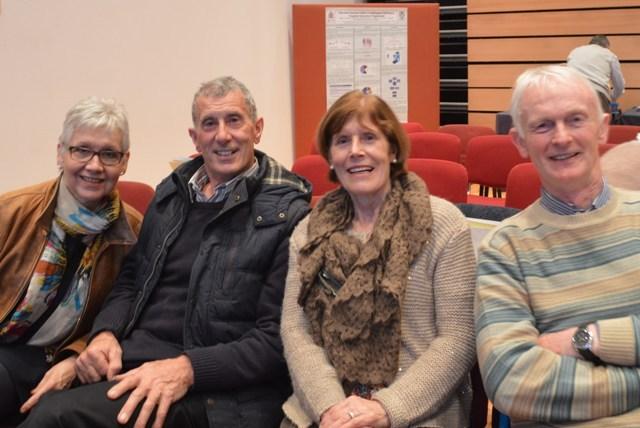 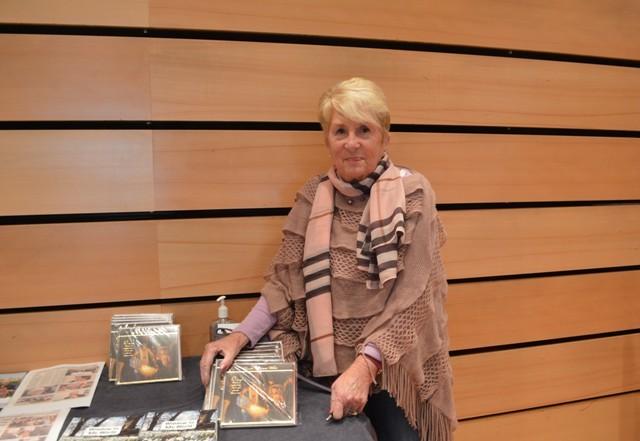