Report from the Alpha-1 Chopin Award 2012 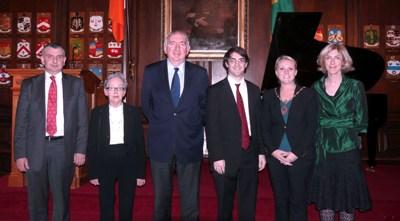 A large crowd attended our 2nd Annual Alpha-1 Chopin Award which took place on Thursday 15th November in the Oak Room of the Mansion House in Dublin. This annual competition is becoming a permanent fixture on the Dublin cultural calendar and we are indebted to the Lord Mayor of Dublin Councillor Naoise Ó Muirí for the continued use of the historic Oak Room.

We were delighted to welcome on the night Deputy Lord Mayor Councillor Clare Byrne who graciously opened the event. Three music students were competing for the Alpha-1 Chopin Bursary, Adam McDonagh from Dublin Institute of Technology, Michelle Cooke from Cork School of Music, and Alexander Bernstein from the Royal Irish Academy of Music.  We were privileged to have as our judges Anthony Long, General Manager of the RTÉ Concert Orchestra and Florence Ryan, a renowned pianist and piano teacher who has frequently performed with the RTÉ National Symphony Orchestra. Each student performed a piece by Chopin and after three excellent performances our judges awarded Alexander Bernstein the Chopin Bursary for 2012.

The composer Frédéric Chopin suffered from chronic respiratory disease, probably alpha-1 antitrypsin deficiency, during his short but very productive life. The Alpha One Foundation host this annual competition to celebrate his life and draw attention to research into lung disease, particularly research into alpha-1 antitrypsin deficiency (a form of inherited emphysema). As his condition greatly influenced his music we celebrate Chopin’s life and music each year around the anniversary of his death. We envisage this bursary will be awarded on an annual basis and it is hoped that it encourages the winning student to pursue a career in music.

We would like to thank the judges and our volunteers from the RCSI Department of Medicine for giving of their valuable time.  We hope that all those who attended enjoyed the wonderful performances from three talented musicians and we look forward to another excellent Chopin competition next year.