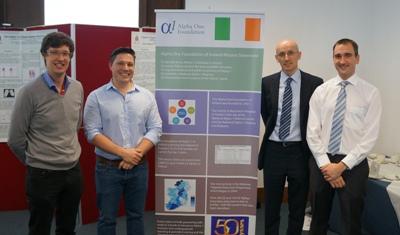 The annual Alpha-1 conference took place in Marino Institute of Education last Friday October 11th. Over 50 Alphas and their families attended making it our biggest and most successful conference to date.

Upon arrival at Marino attendees were registered by Laura Fee, Clinical Research Associate with the Alpha One Foundation, and presented with their goodie bags. After being treated to tea, coffee & scones the conference began with a lively Q&A session by Professor McElvaney who fielded questions from the floor, described a recent study among MZ carriers by his research group, and outlined details of a new clinical trial for ZZ individuals due to start in early 2014.

The next speaker was Dr. Frank Doyle, a psychologist & RCSI lecturer who spoke about the clear benefits of healthy eating, the growing phenomenon of mindless eating, and how the size of the utensils we use influences the size of the portions we eat. Dr. Gianpiero Cavalleri, an RCSI geneticist & lecturer, then spoke about the blueprint for life also called DNA, how changes in the DNA (known as mutations) that we inherit from our parents can be positive, negative, or neutral, and how DNA can help us learn about the people who first populated Ireland.

Dr. Tomás Carroll from the Alpha One Foundation brought the audience up to speed with the high prevalence of Alpha-1 in Ireland and presented data from the national targeted detection programme based at Beaumont Hospital which is co-ordinated by Tomás and Laura. To date, this is the only national screening programme for Alpha-1 in the world and over 25 hospitals all over Ireland are participating. In the slot just before lunch Dr. David Bergin a researcher from the Department of Medicine in RCSI Beaumont spoke about some of the Alpha-1 research projects he was working on. Dr. Bergin also described the difference between basic research and clinical research, the importance of patient involvement in all types of research through a process called informed consent, and how such research can lead to new treatments and better outcomes for patients.

After a hearty lunch we returned to the most inspiring presentation of the day. Michael McGloin travelled from Sligo to talk about his long journey over many years to a final diagnosis of chronic obstructive pulmonary disease (COPD), sometimes called emphysema. After his diagnosis in 1999, Michael recognised there were no support structures in place for people who were struggling to understand a condition they had never heard of, a situation that Alphas are only too familiar with. To help fellow COPD sufferers Michael started a COPD patient support group in his local area, and went on to help set up several regional COPD groups around Ireland. This has all culminated in the formation of a national COPD support body called “COPD Support Ireland” which will lobby the government on behalf of all COPD patients. 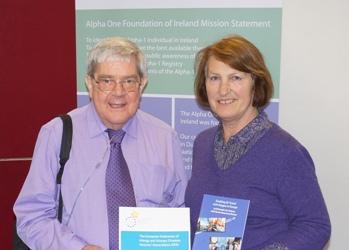 Our final speaker of the day was our most energetic, Michelle O’Brien, senior physiotherapist in the Respiratory Unit at St. Michael’s Hospital in Dún Laoghaire. Michelle coordinates the pulmonary rehabilitation programme in St. Michael’s and spoke about the benefits of their specific exercise regime designed to help people with respiratory disease. This was followed by a lively (and funny) exercise session by all present. Finally, Kitty O’Connor CEO of the Alpha One Foundation wrapped up proceedings by thanking everyone for coming. 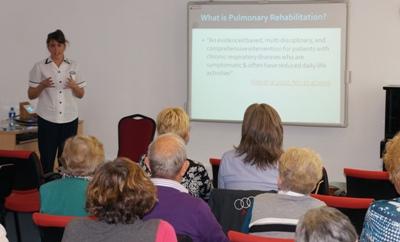 We would like to thank all our speakers who kindly donated time out of their busy schedules to come and present on Friday. We particularly want to thank everyone who attended, some of whom travelled very long distances (and rose as early as 5am to catch trains). A big thank you also to the patient support group whose fundraising efforts over the past 12 months resulted in the presentation of a cheque for €2,000 to the Alpha One Foundation. This will help to fund a badly-needed IT upgrade of the system used by the foundation to record every sample received for Alpha-1 testing, a system improvement we were unable to carry out due to recent cuts in our government funding.

The success of this year’s conference is down to the Alpha-1 community in Ireland which is growing all the time. We encourage all Alphas to talk about Alpha-1 with their family and friends, and to remember that a problem shared is a problem halved. If anyone would like to organise a regional meeting for Alphas or organise a fundraising event in your area please contact us in the Alpha One Foundation and we would be delighted to help out. We look forward to seeing everyone at next year’s conference and if you would like to view some photos of the 2013 conference please check out our Facebook page Alpha One Foundation Ireland.