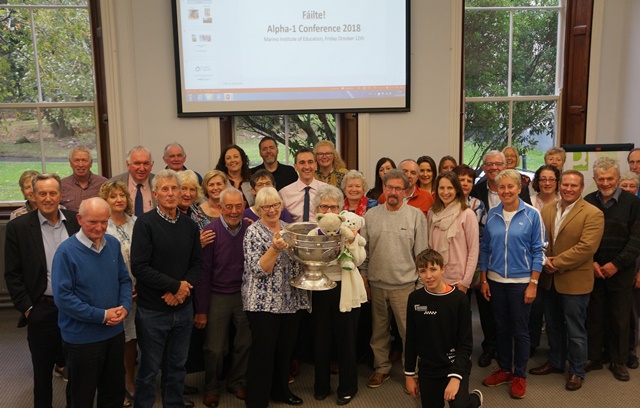 Alpha-1 Conference 2018 took place in the Marino Institute of Education in Dublin on Friday, October 12th.  A large gathering braved Storm Callum and the severe weather warning, with some hardy souls rising as early as 4am that morning to make the long journey to Dublin.  A mix of familiar faces and first time attendees enjoyed tea, coffee and scones on arrival.

With the important theme of “Family Matters” Alpha-1 Conference 2018 was opened by Mr. Joe Duffy, RTE broadcaster, author, and columnist.  The theme of family was chosen because Alpha-1, like all genetic conditions, runs in families and once one person in a family is diagnosed, others should consider getting tested as they may also be affected.  Joe welcomed everyone to the Marino area of Dublin’s north side and spoke about its rich musical history, mentioning U2, The Dubliners and Enya.  Joe stressed the importance of community, and supporting one another, particularly for those faced with the frightening prospect of being told for the first time “you have a genetic condition called Alpha-1”.  He then finished with a host of funny answers from the famous “Just a Minute Quiz” on RTE Radio to lighten proceedings. 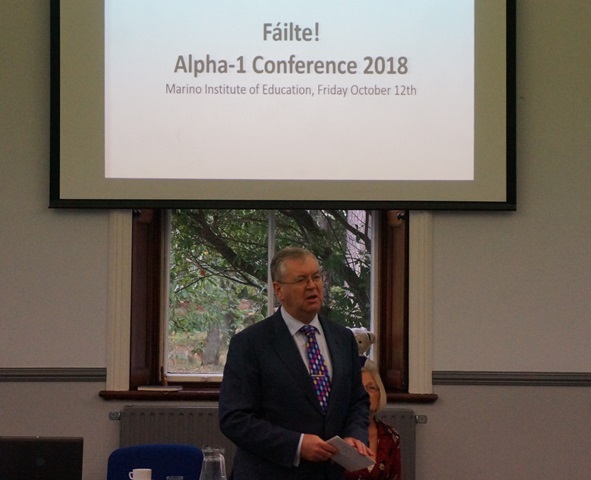 Gianpiero Cavalleri, Associate Professor in Human Genetics from RCSI then gave an excellent talk on genetics and how DNA contains the instructions for all life.  After describing how DNA was first discovered, Gianpiero revealed how much DNA can tell us, from risk of disease to where our ancestors came from.  DNA is organised into small units called genes.  The gene for alpha-1 antitrypsin is just one of 21,000 genes we hold in our DNA.  We all have 2 copies of each gene, 1 we inherit from our mother, 1 we inherit from our father.  This is why people with Alpha-1 are given 2 letters for their diagnosis, each letter representing an Alpha-1 gene inherited from a parent.  These 2 letters are usually a combination of M, S, or Z.  Gianpiero talked about how the changes in DNA (sometimes called mutations) are passed down from generation to generation in the same way as surnames.  The Z mutation in the alpha-1 antitrypsin gene that causes the condition alpha-1 antitrypsin may have been spread across Europe by the Vikings and their ancestors. 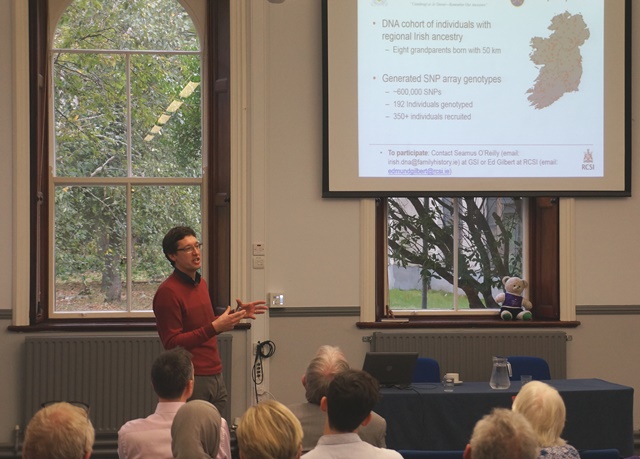 Next up was Professor Gerry McElvaney who gave an update of current and future research into Alpha-1 including the availability of augmentation therapy (Respreeza) in Ireland.  Respreeza has been conclusively shown in a randomised placebo-controlled clinical trial to slow down emphysema progression.  It is the only therapy that treats the underlying condition in those with emphysema caused by severe AATD.  Professor McElvaney discussed other new treatments including aerosolised alpha-1 antitrypsin to treat lung disease, gene therapy for Alpha-1, and RNA interference drugs to treat liver disease in Alpha-1.  He was hopeful that a number of new studies for Alpha-1 will start in 2019. 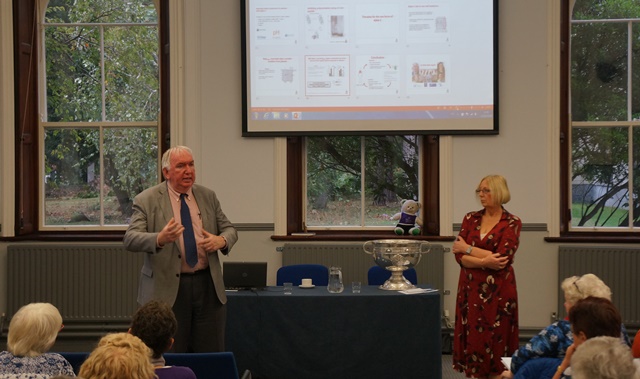 Our second VIP of the morning the Sam Maguire trophy arrived for the mid-morning coffee break.  Currently in the possession of Dublin for a 4th consecutive year, Sam caused great excitement with a queue of admirers.  Lots of photos were taken.  We are very grateful to Dublin GAA for sharing their most prized possession with us. 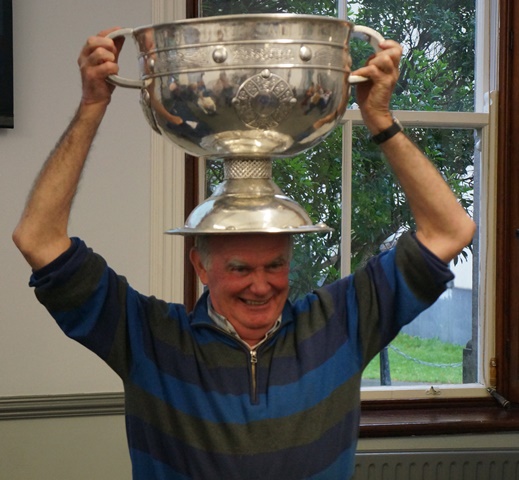 After a short break Jenny King (née McGuirk) gave a wonderful presentation on behalf of her mother Josephine McGuirk.  Unfortunately, Josephine was unable to attend because of poor health.  Jenny revealed that while in hospital Josephine was on a crusade to raise awareness of Alpha-1 in staff and patients.   Jenny talked about how her mother’s brother Brendan was the first in the family diagnosed with Alpha-1.  From a large family of 10 brothers and sisters, this diagnosis had a big impact with 3 further siblings found to have severe Alpha-1 of the ZZ type.  This included Josephine, who at the time was a busy mother of 4 with no time to worry about her own health.  Then a smoker Josephine realised that she had to quit immediately.  As Jenny explained, this also had an effect on the next generation – who became very aware of the dangers of smoking along with Alpha-1 and knew to avoid at all costs.  Since her diagnosis Josephine has been a passionate supporter of early testing.  She knows only too well how important a diagnosis of Alpha-1 can be as it helps people to make the right decisions (like stopping smoking) and to get the right care.  Finally, Jenny highlighted her mother’s positive attitude and great sense of humour.  After a warm round of applause Jenny’s talk was followed by a lively question and answer session. 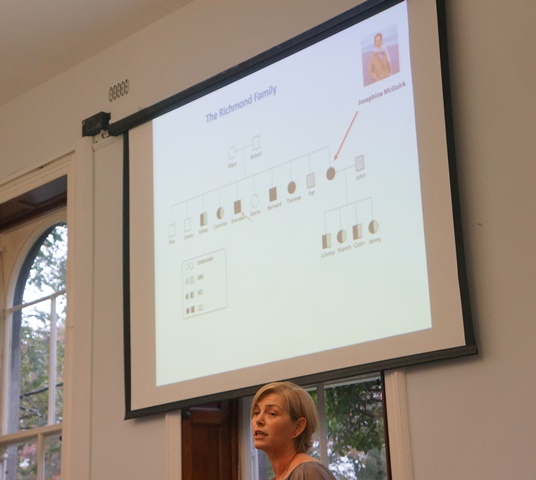 Next to speak were Layali Aldaihani and Andrew Woodsmith, medical students in RCSI.  The hard-working Layali and Andrew carried out an 8 week research project with Alpha-1 Foundation Ireland looking at smoking habits and behaviour among people with severe AATD of the ZZ type.  Their research findings are very important – showing that people diagnosed with severe Alpha-1 stop smoking very soon after their diagnosis, and do not restart smoking once they have stopped.  This was Layali and Andrew’s first time to present in front of an audience and they got a great reception. 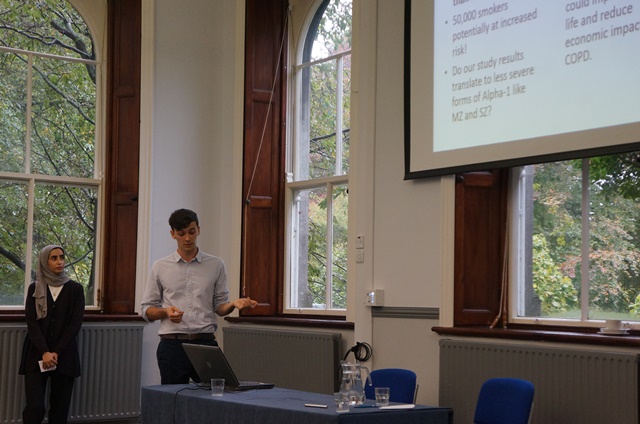 After an enjoyable lunch we heard from Avril Kennan who is CEO of the Medical Research Charities Group (MRCG).  The MRCG supports charities to engage fully in health research with the aim of increasing the quantity and quality of patient-relevant research.  Avril is passionate about making science accessible and involving patients and the public in research at every stage of the process.  Her talk titled “Research and the Patient Voice” described how the research landscape is changing for the better to allow real and valuable input from the public and patient community.  The motto “Nothing About Us Without Us” was used by Avril to explain the changing research environment.  This is a rising tide that lifts all boats – patients and scientists.  Avril argued that listening to and incorporating the patient voice yields many benefits including research that’s more relevant to the people it’s intended for, more motivated scientists, and more empowered patients.  Ultimately, society in general will benefit – with the added bonus of learning to better appreciate the value of research. 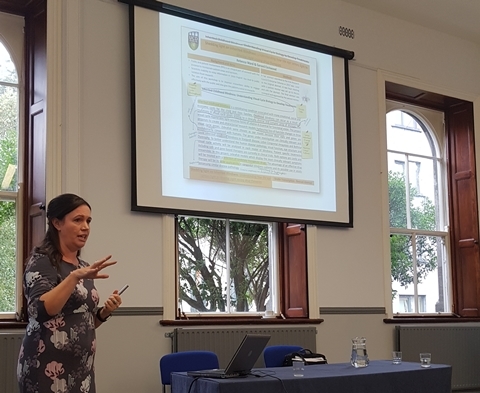 Dr. Tomás Carroll then spoke about the day to day activities of Alpha-1 Foundation Ireland. Tomás described Alpha-1, how it is caused, and how the Foundation provides a free test for Alpha-1 as part of the National Alpha-1 Targeted Detection Programme.  This is funded by the HSE with over 150 people tested for Alpha-1 every month.  So far over 650 people with severe Alpha-1 have been diagnosed in this programme.  Tomás outlined a variety of other activities including awareness and health promotion initiatives, and how people can find out more information on the new look Alpha-1 Foundation Ireland website www.alpha1.ie, as well as on Facebook and Twitter.  An increasing number of GPs are contacting the Foundation looking for information, and Tomás suggested that everyone in attendance take a “What is Alpha-1” poster to display in their own local GP waiting room.  Tomás then explained the importance of the National Alpha-1 Registry which is hosted by the Foundation.  The registry is a confidential database of people with Alpha-1. The registry collects a variety of medical information, which is used to increase our knowledge of Alpha-1.  The more we learn about Alpha-1, the more chance there is of better treatments and better health for those diagnosed with the condition. The registry is also an important tool to identify people who might be suitable to receive a new drug as part of a clinical trial.  Tomás highlighted the successful registry re-development and expansion and thanked former colleagues Margaret Molloy and Siobhán Lee for their hard work on this project. 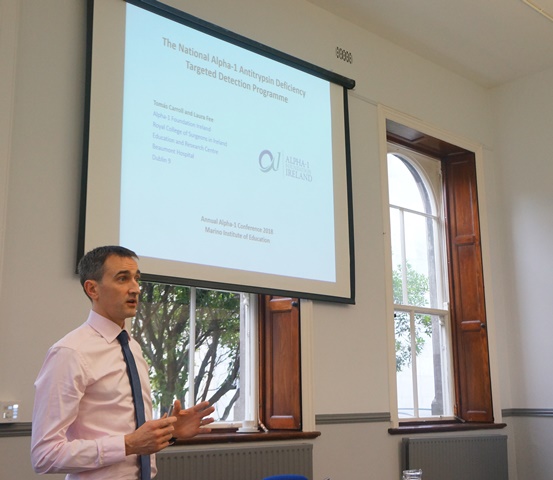 Next up was Dr. Alex Franciosi, clinical lecturer and PhD student who outlined his research looking at SZ type Alpha-1.  There are an estimated 12,000 people on the island of Ireland who are SZ, and so far 320 have been detected.  The SZ Alpha-1 group are not as well studied compared to ZZ Alpha-1 with some controversy surrounding the precise risk of lung and liver problems in the SZ group.  Alex is studying families with at least one SZ member to better understand the risk of health problems for this type of Alpha-1.  This project is funded by the US Alpha-1 Foundation.  If anyone diagnosed with SZ AATD wants to find out more please contact Alex on alessandrofranciosi@rcsi.ie or ring 01-8093871. 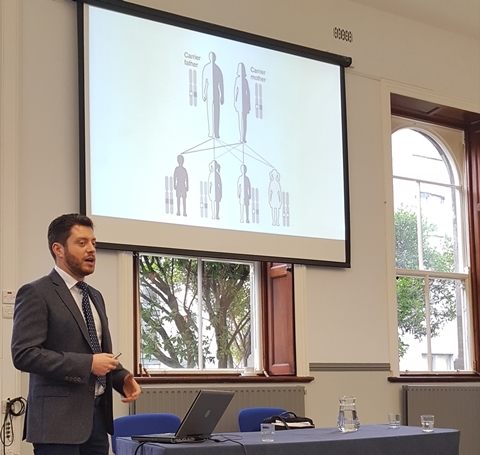 The final speaker of the day was Eóin Durkan from the School of Health and Human Performance, Dublin City University (DCU).  Eóin is a PhD student in DCU in collaboration with Alpha-1 Foundation Ireland and the Irish Research Council.  His research is examining exercise as a treatment for lung disease caused by Alpha-1.  Eóin’s goal is to set up an effective pulmonary rehabilitation programme designed for people with Alpha-1.  A strong believer in exercise as medicine Eóin is passionate about the potential of exercise as a therapy for lung disease.  If you wish to take part in this exciting project contact Eóin on eoin.durkan@dcu.ie or call 01-7008470. 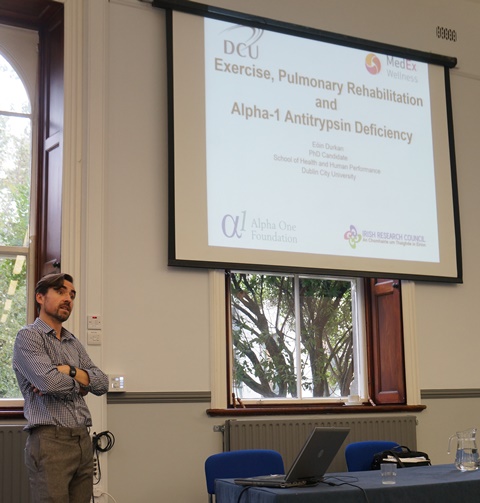 A big thank you to all of our speakers who kindly took time out of their busy schedules to come and present.  Thank you to A. Menarini, Medical Supply Company, and Asistec who sponsored the conference with unrestricted educational grants.  A big thank you to Eóin Durkan, Andrew Woodsmith and Layali Aldaihani for helping with the smooth running of the conference.  Their help was much appreciated by our small team.

More photos from the conference are posted on our Facebook page here.  If you would like to suggest topics or ideas for next year’s conference please let us know (phone 01-8093871 or email us at alpha1@rcsi.ie).

Finally after Storm Brian and Storm Callum we are hoping for a storm free conference next year.  Third year lucky!