The Annual Alpha-1 Patient Conference took place again this year in the Marino Institute of Education in Drumcondra in Dublin on Friday, October 20th. Over 60 Alphas and family members attended with plenty of familiar faces as well as a lot of first time attendees.

Tea, coffee and scones were a welcome start to the morning, particularly for the early risers who had made long journeys. Conference 2017 was officially opened by Mr. Henry Moehring, CEO and President of the US Alpha-1 Foundation. Henry gave a great insight into the amazing work being done by his organisation for the Alpha-1 Community in the US and globally. In what was an inspirational speech, he touched upon the key themes of research, detection, support, education, advocacy, and engagement. The US Alpha-1 Foundation has been hugely supportive of the Alpha One Foundation since our inception in 2001. We have to thank Henry for immediately getting stuck in to help with auditorium set up and final preparations when he arrived that morning. Sleeves were rolled up. This was much appreciated by our small team. 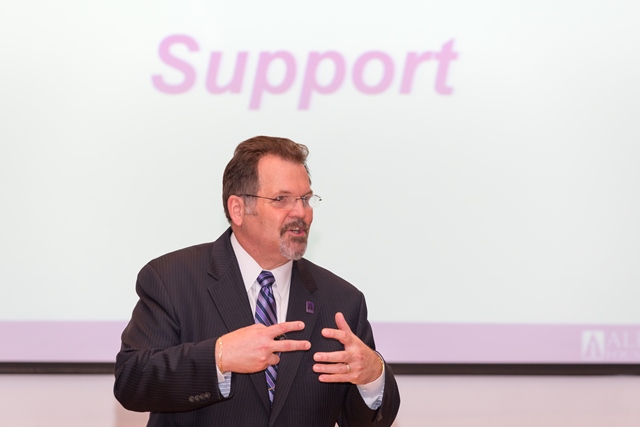 Our second guest speaker was Professor Gerry McElvaney who gave an excellent synopsis of current and future clinical research into Alpha-1 including the controversy surrounding the funding of augmentation therapy (called Respreeza).  Respreeza has been conclusively shown in a randomised placebo-controlled trial to slow down emphysema progression.  It is the only treatment to treat the underlying condition in those with emphysema caused by severe AATD. Unfortunately, this is an expensive therapy and is yet to be made freely available to Irish Alphas. Professor McElvaney discussed other new treatments including aerosolised alpha-1 antitrypsin to treat lung disease, gene therapy for Alpha-1, and RNA interference drugs to treat liver disease in Alpha-1. 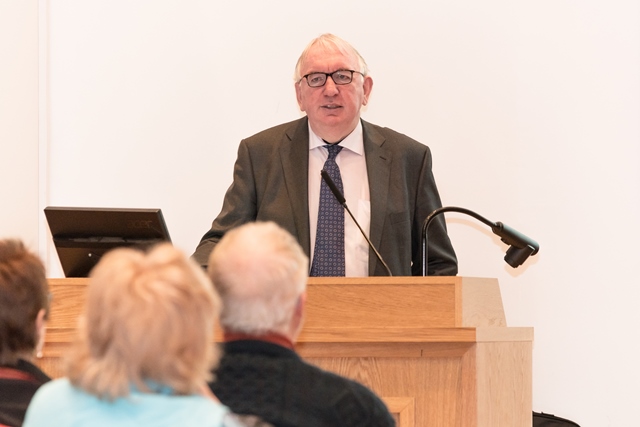 After a short break Dr. Aisling de Paor from the School of Law in DCU spoke about genetic discrimination in Ireland and what this concept means. She described the increasing availability of genetic testing and how as costs reduce, the numbers of people taking genetic tests (sometimes via online companies) has dramatically increased. This has meant an urgent need for legislation and the law to keep pace with technology and science. Aisling discussed flaws in the current Irish legislation which offers only a partial protection against discrimination, and spoke about her hope for stand-alone legislation to specifically deal with genetic discrimination. This should ensure greater protection against discrimination for people with genetic conditions like Alpha-1. This could also help remove the fear of discrimination which is one of the barriers to people taking the test for Alpha-1. Unfortunately, by not taking the test and getting a correct diagnosis of Alpha-1, people often suffer from poorer health. 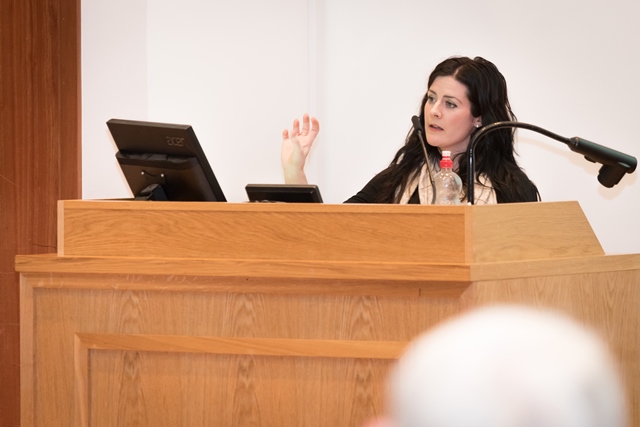 Next to speak was Dr. Emer Reeves from RCSI who gave an excellent synopsis of current research into Alpha-1. She spoke about how research into Alpha-1 adds to our understanding of the condition, leads to new treatments and the vital role that patients play in research. In particular, she described her long love affair with the small but powerful white blood cell called the neutrophil which we need to fight infection and stay healthy. Emer then introduced three scientists from her group who presented their Alpha-1 research projects in short 3 minute easy summaries for a public audience. 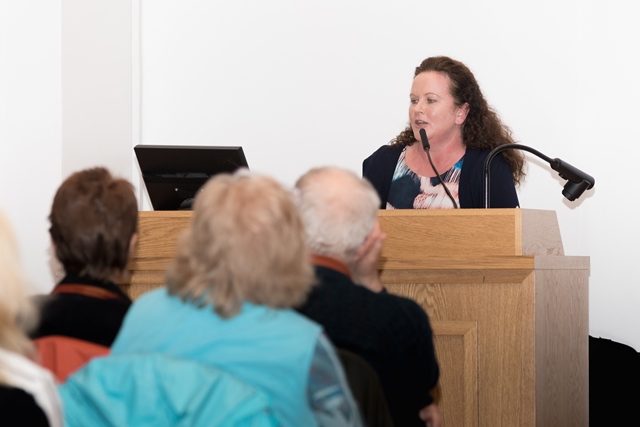 Danielle Dunlea discussed how she is studying the sugars that decorate the surface of the alpha-1 protein. These sugars are important for mopping up harmful substances in the blood in the days after an infection is successfully cleared. 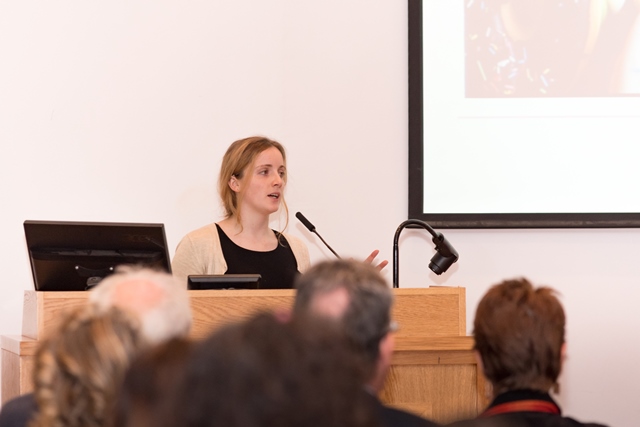 Laura Fee then explained how she is looking at a part of our immune system called the complement system which we need to fight infection. Laura provided evidence for the complement system behaving unusually in people with Alpha-1. Finally, Dr. Noreen Lacey discussed her project which is examining platelets and how they behave in people with Alpha-1. The platelet is a fascinating cell and was originally thought to have a single role, the formation of clots and wound healing. Noreen and others are now showing that the platelet may have other roles in our immune system. 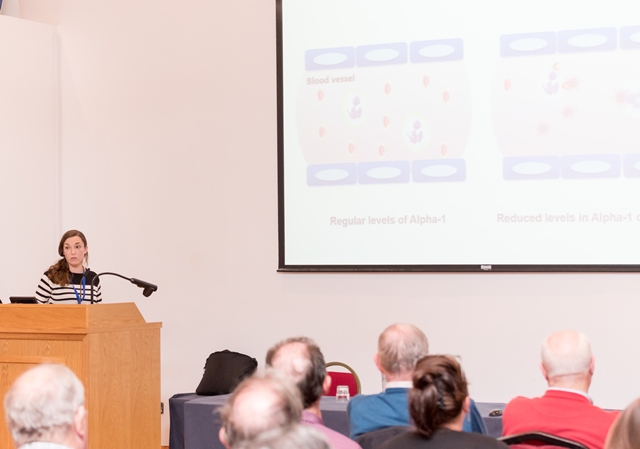 This was followed by a lively question and answer session. The best research comes from a partnership between patients, doctors, nurses, and scientists, and Emer, Danielle, Laura and Noreen thanked everyone for their willingness to participate in research.

Up next were Dr. Tomás Carroll and Margaret Molloy who spoke about the day to day activities of the Alpha One Foundation. Tomás described Alpha-1 itself, how it is caused, and how the Alpha One Foundation provides a free test for Alpha-1 as part of the National Alpha-1 Targeted Detection Programme which is funded by the HSE. Over 200 people are tested for Alpha-1 every month by the Foundation.  So far over 300 people with severe Alpha-1 have been diagnosed in this screening programme. If someone is diagnosed with Alpha-1, a lab result is sent along with a cover letter to the requesting doctor to clearly explain the result along with details of the specialist Alpha-1 clinic in Beaumont Hospital. Tomás outlined a variety of other activities including awareness and health promotion initiatives, and how people can find out more information on Alpha-1 (www.alpha1.ie, Facebook, and more recently Twitter). 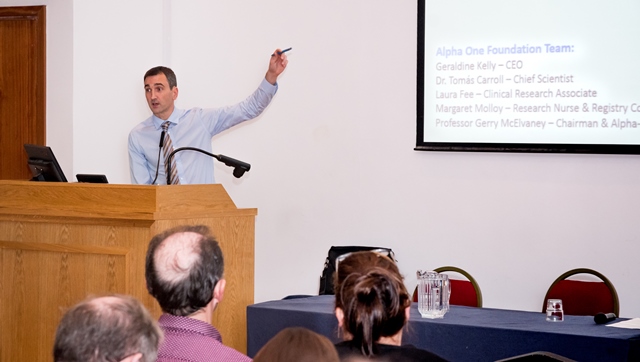 Margaret then explained the importance of the National Alpha-1 Registry which is hosted by the Alpha One Foundation. The registry is a confidential database of people with Alpha-1. The registry collects a variety of medical information, and this information is used to increase our knowledge of Alpha-1. The more we learn about Alpha-1, the more chance there is of better treatments and improved outcomes for those diagnosed with the condition. The registry is also an important tool to identify people who might be suitable to receive a new drug as part of a clinical trial. Margaret highlighted the successful registry re-development project which she managed. The new improved AATD registry was launched in June 2017. 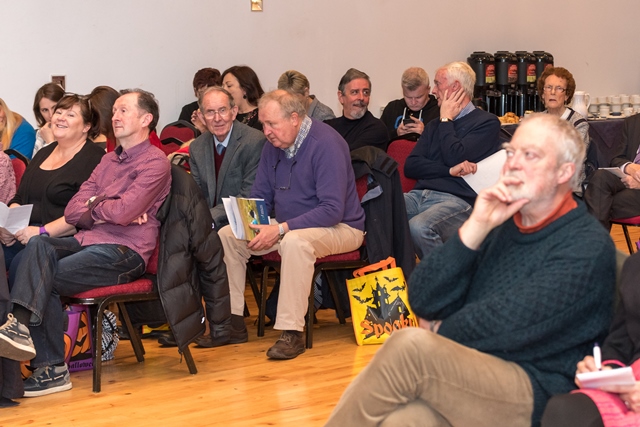 After an enjoyable lunch in the college canteen we heard from Dr. Alex Franciosi, MD student who explained his own research on SZ alpha-1 antitrypsin deficiency. There are an estimated 12,000 people on the island of Ireland who are SZ, and so far 290 have been detected. The SZ Alpha-1 group are not as well investigated compared to ZZ Alpha-1. There is some controversy surrounding the precise risk of lung and liver problems in the SZ group. Alex will study families with at least one SZ member to better understand the risk of health problems for this type of Alpha-1. This is a project funded by the US Alpha-1 Foundation and if anyone diagnosed with SZ AATD wants to find out more please email Alex on alessandrofranciosi@rcsi.ie or ring 01-8093871.

The final speaker of the day was Eóin Durkan from the School of Health and Human Performance, Dublin City University (DCU). Eóin is undertaking a PhD in DCU in collaboration with the Alpha One Foundation and the Irish Research Council. His research project is examining exercise as a treatment for lung disease caused by Alpha-1. Eóin’s goal is to set up an effective pulmonary rehabilitation programme tailored for people with Alpha-1. He is a strong believer in exercise as medicine and passionate about the potential of exercise as a therapy for lung disease. If you wish to participate in this exciting new project or simply find out more, contact Eóin by email eoin.durkan@dcu.ie or call 01-7008470. 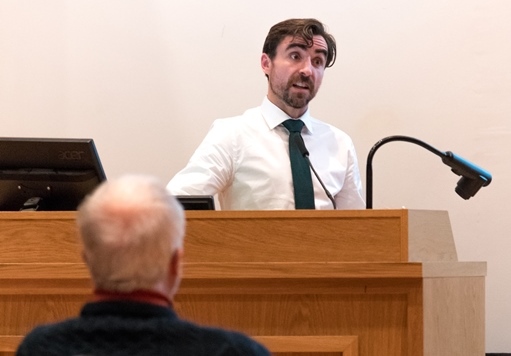 Thanks to everyone who braved the weather warning associated with Storm Brian to attend conference 2017. A big thank you to all of our speakers who kindly took time out of their busy schedules to come and present. Thank you to A. Menarini who sponsored the conference with an unrestricted educational grant. Thanks also to Orla Keane who helped out on the day with attendee registration, Christmas cards, and poetry books. A selection of John O’Donnell’s beautiful poems have been published in the book “Window to my World” and many copies were sold on the day. If you would like to buy copies of this beautiful collection of poetry, click here.