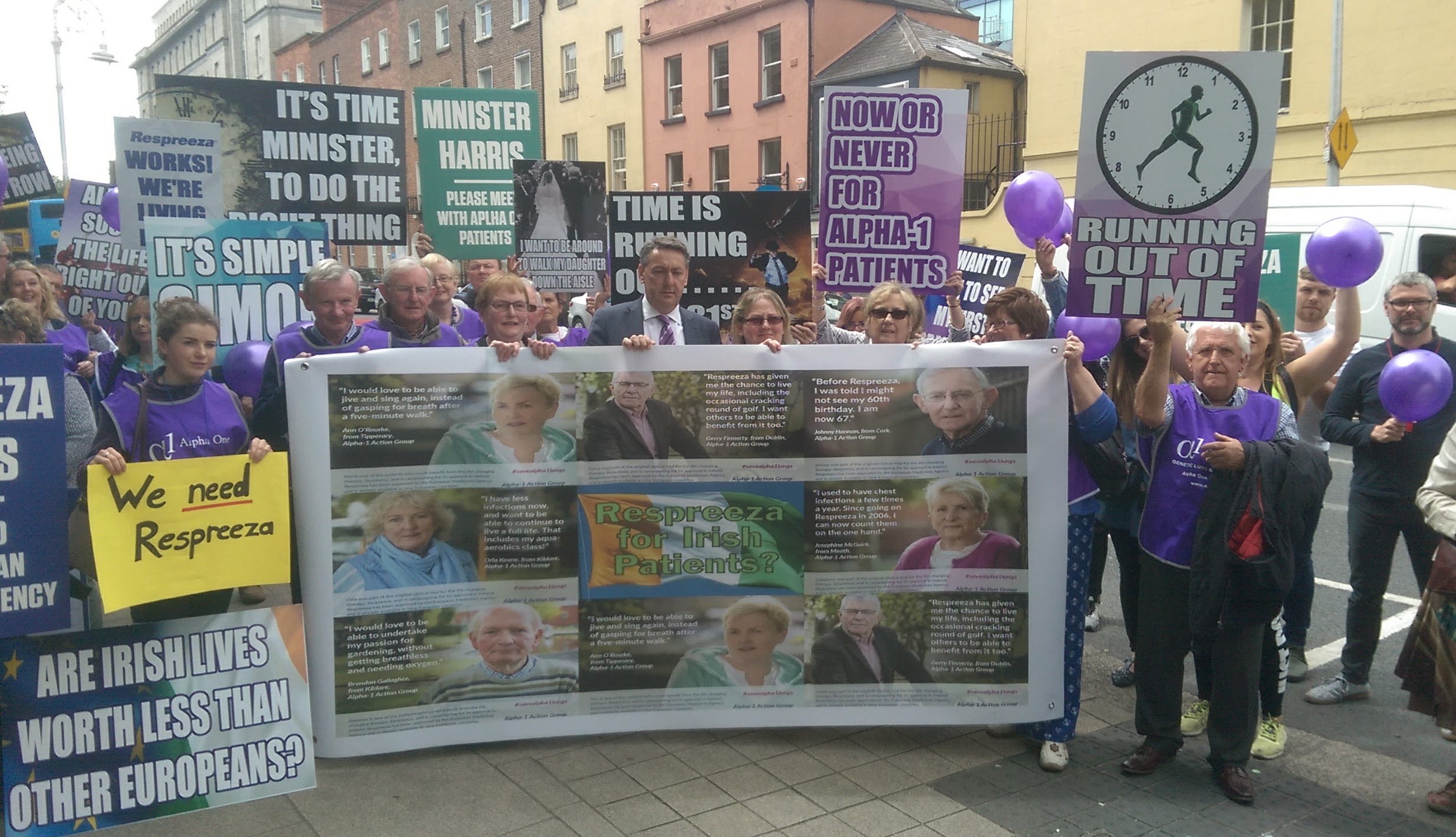 Alpha One Foundation calls on Minister to reconsider decision for patients who have no other therapy option –
Drug company, CSL Behring, urged not to stop therapy for 21 patients already receiving drug on “compassionate-use” basis –

On behalf of patients with Alpha-1 (genetic emphysema), the Alpha One Foundation has expressed extreme regret at the decision by the HSE  ̶  which has today been formally communicated to it  ̶  that it has decided not to approve the reimbursement of the life-changing therapy, Respreeza.

The Foundation is calling on the Minister for Health to reconsider the decision which is a devastating blow to the estimated 60 patients who could benefit from the drug and whose health now hangs in the balance. Respreeza is the only therapy approved to treat the emphysema caused by severe Alpha-1 and is already available and reimbursed in 12 European countries.

Of the 60 patients, 21 have been fortunate to have been able to access a “compassionate-use” scheme operated by the drug manufacturer, CSL Behring, due mainly to their participation in a clinical trial. However, the future is also uncertain for these patients, as the company has previously stated that supplying Respreeza on a compassionate basis indefinitely is not an option. The Foundation is calling on CSL Behring to reconsider withdrawing the therapy and to show generosity of spirit in putting patients first.

Prof Gerry McElvaney, the Consultant Respiratory Physician involved in the clinical trial of Respreeza in Ireland, and Chair of the Alpha One Foundation, comments:
“The drug approvals process is not working. The drug Respreeza has been shown to be effective in slowing progression of emphysema. The only question is one of cost. It is absolutely clear that those adjudicating on this matter are not in a position to comment or to make a decision on the efficacy of the drug. Respreeza definitely slows the progress of emphysema. All of the 21 Irish patients have experienced an improvement in the quality of their lives. No Irish patient died during the study and its extension, a time period of over 12 years. If the European Medicines Agency and 12 countries in Europe agree the drug works and is effective why is the HSE saying it isn’t?

“The longer patients are not receiving this drug the more lung damage they will suffer. This lung damage cannot be reversed. For those who have been fortuitous to have been able to access the therapy as part of CSL Behring’s compassionate-use scheme, they are incredibly worried and anxious. There are no data on what happens when people stop this medication after being on it for a long period of time, a scenario into which these particular patients are now facing. The lack of proper engagement and communication with patients throughout this time has been appalling and goes back to a broken process. If the HSE really prides itself on its stated values of care, compassion and trust, these have been sorely absent.”

Geraldine Kelly, Chief Executive,  Alpha One Foundation, comments:
“Today’s decision is a huge blow for patients with severe Alpha-1 who have been campaigning for months for the approval of Respreeza.

“For these patients, Respreeza is the only approved drug which has been shown to slow down the progress of emphysema which is one of the severe effects of Alpha-1. They have met with public representatives, have presented their case before the Oireachtas Joint Committee on Health, and have marched outside Dáil Éireann, all the while expending a huge amount of effort and energy  ̶  often at considerable cost to their own health.

“We know Respreeza works in slowing the progression of emphysema which can have a hugely debilitating impact on people’s lives. It is a much-needed lifeline for patients who have no alternative. In the absence of a positive decision, patients who have never been able to access the therapy will inevitably see their health continue to decline.
“It is not too late for the Minister for Health to reconsider this decision in the best interests of patients. This therapy is the only one available that has been shown to work in patients with emphysema caused by severe Alpha-1.

“We again urge that the Minister and the HSE look at the evidence. We ask them to consider the benefits to people’s quality of life. We ask them to take into account the cost savings through reductions in hospitalisations and spending on other less effective medicines.

“Equally, we urge CSL Behring to put forward a cost that is realistic. We ask the company not to withdraw the therapy from the 21 people currently receiving it. These patients have been selfless in taking part in the clinical trial here, which has been of huge benefit to the company in demonstrating the efficacy of this therapy and their service should be recognised. Such a gesture would no doubt be noted by clinicians and future prospective patients when considering whether to support clinical trials.

“We urge the Minister, the HSE, and CSL Behring to pull back from the brink. We ask all parties involved to please put patients first.”

Respreeza was approved by the European Medicines Agency in 2015 and is the only therapy documented in a clinical study to slow the progression of lung disease caused by Alpha-1. Clinical trial results published in The Lancet in 2015, and in The Lancet Respiratory Medicine in 2016, conclusively demonstrated a slowing down in the progression of emphysema by 34% in patients with severe Alpha-1. An Alpha One Foundation patient survey has also shown a decrease in the frequency and severity of chest infections and associated hospital admissions.