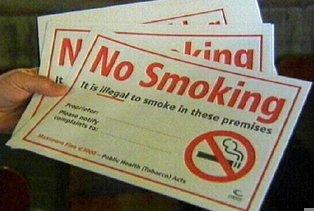 On March 29, 2004 the Republic of Ireland became the first country in the world to implement a national workplace smoking ban. This legislation was comprehensive, banning smoking in workplaces including restaurants, bars and pubs. Following the ban studies carried out in pubs and bars showed a decrease in worker’s exposure to second hand smoke and related improvements in their lung function and respiratory symptoms.

Other studies have shown a reduction in hospital admissions for coronary syndromes and pulmonary disease, likely due to the smoking ban. A recent study which looked at data from 2000-2007 showed that the ban was associated with an immediate reduction in early mortality in those aged >35, particularly those with cardiovascular, cerebrovascular and respiratory causes. In fact this study shown that up to 3,726 smoking related deaths were likely prevented due to the smoking ban. This is the first study in the world to show a reduction in mortality in cerebrovascular and pulmonary diseases due to smoke-free legislation, and also the first to show a lessening of health inequalities.

The study entitled ‘Irish smoking ban and reduced (a) mortality and (b) inequalities in smoking related diseases’. which was carried out by the Tobacco Free Research Institute, Dublin Institute of Technology, Brunel University and UCC was recently awarded a commendation at the Irish Healthcare Awards for ‘Research Paper of the Year’. This study is published in the international journal PLOS ONE (doi:10.1371/journal.pone.0098617).