Minister for Health Leo Varadkar Visits the Alpha One Foundation 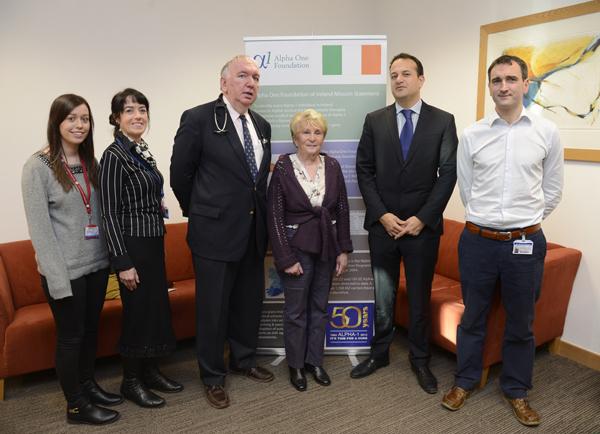 Minister for Health Leo Varadkar visited the Alpha One Foundation in Beaumont Hospital on Monday December 1st, to learn about Alpha-1, a genetic condition that can cause lung and liver problems.  Minister Varadkar met staff of the Alpha One Foundation and was given a tour of the laboratory where testing for Alpha-1 takes place. The Minister also spoke to Mrs. Josephine McGuirk, who was diagnosed with Alpha-1 15 years ago following her brother’s diagnosis.

Alpha-1 antitrypsin deficiency (Alpha-1) affects approximately 250,000 people on the island of Ireland. It is estimated 1 in 25 people in Ireland carry the gene that causes Alpha-1, and a further 12,000 individuals have the severe form of the condition. The Alpha One Foundation recommends that people who have been diagnosed with COPD should be tested for Alpha-1.

Minister Varadkar was impressed by the many services provided by the Alpha One Foundation and remembered ordering Alpha-1 blood tests for COPD as a young medical doctor. He expressed surprise at the high prevalence of the condition in Ireland.  Minister Varadkar this year launched Ireland’s first National Lung Health Awareness Week, held from September 22-29, which the Alpha One Foundation as a member of the Irish Lung Health Alliance was involved in launching.  In November, he announced the government would invest €850,000 in rare disease research that includes Alpha-1 amongst several other conditions. We are grateful to the Minister for taking time out of his very busy schedule and look forward to working with his department in the months and years ahead. 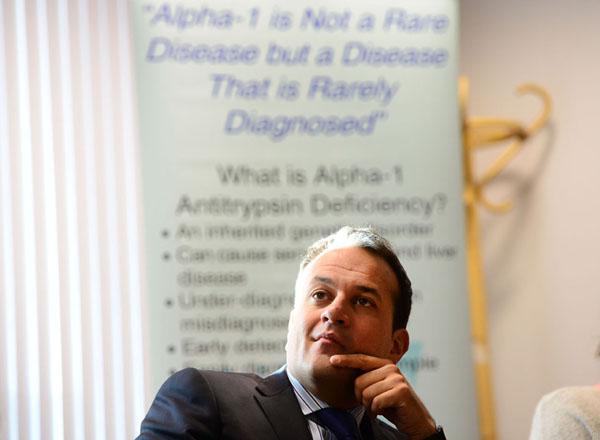 Professor Gerry McElvaney, Professor of Medicine at RCSI, consultant respiratory physician, and chairman of the Alpha One Foundation, said “If people know that they have a genetic predisposition to developing COPD, it allows intervention at an earlier age, encourages smoking cessation and prevents a further decline in lung function in a disease that is otherwise preventable.  It also provides an opportunity for other family members to get tested for Alpha-1.”

“Funded by the Department of Health and Children, the Alpha One Foundation provides a free national screening programme for Alpha-1, the only national screening programme in the world.  We strongly urge people to avail of this service, particularly if they have COPD.  Also as Alpha-1 is a hereditary condition, we recommend that all first degree family members of individuals with Alpha-1 should be tested.  It can be easily diagnosed by a simple blood test.  For more information on how to be tested, contact the National Centre for Alpha-1 based at Beaumont Hospital, Dublin.” added Professor McElvaney.