Annual Alpha-1 Patient Conference 2014: A Report Of the Day 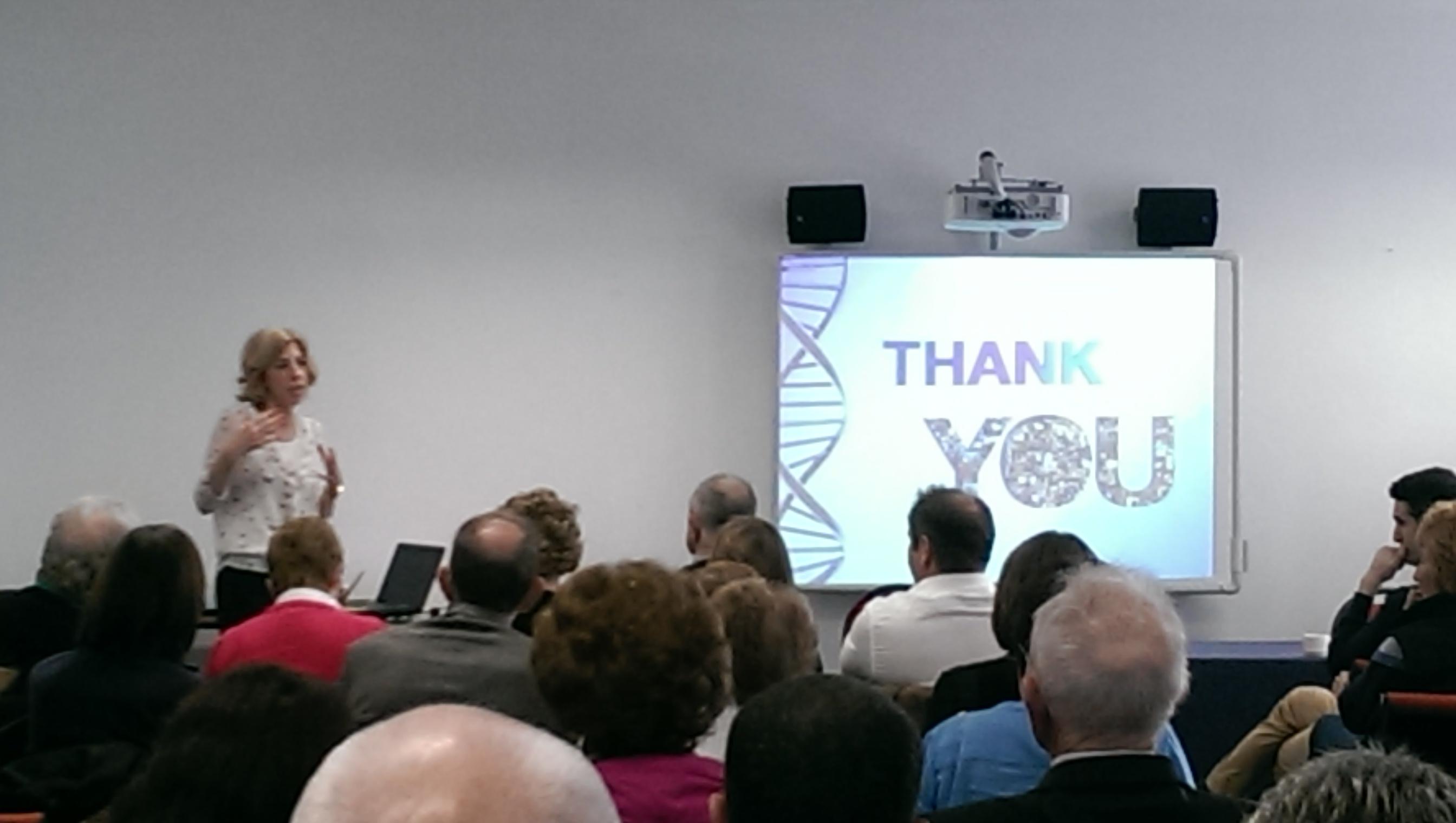 The annual Alpha-1 conference took place again this year in the Marino Institute of Education on Friday, 24th of October. Over 50 Alphas and members of their families attended making it one of the biggest patient meetings to date. 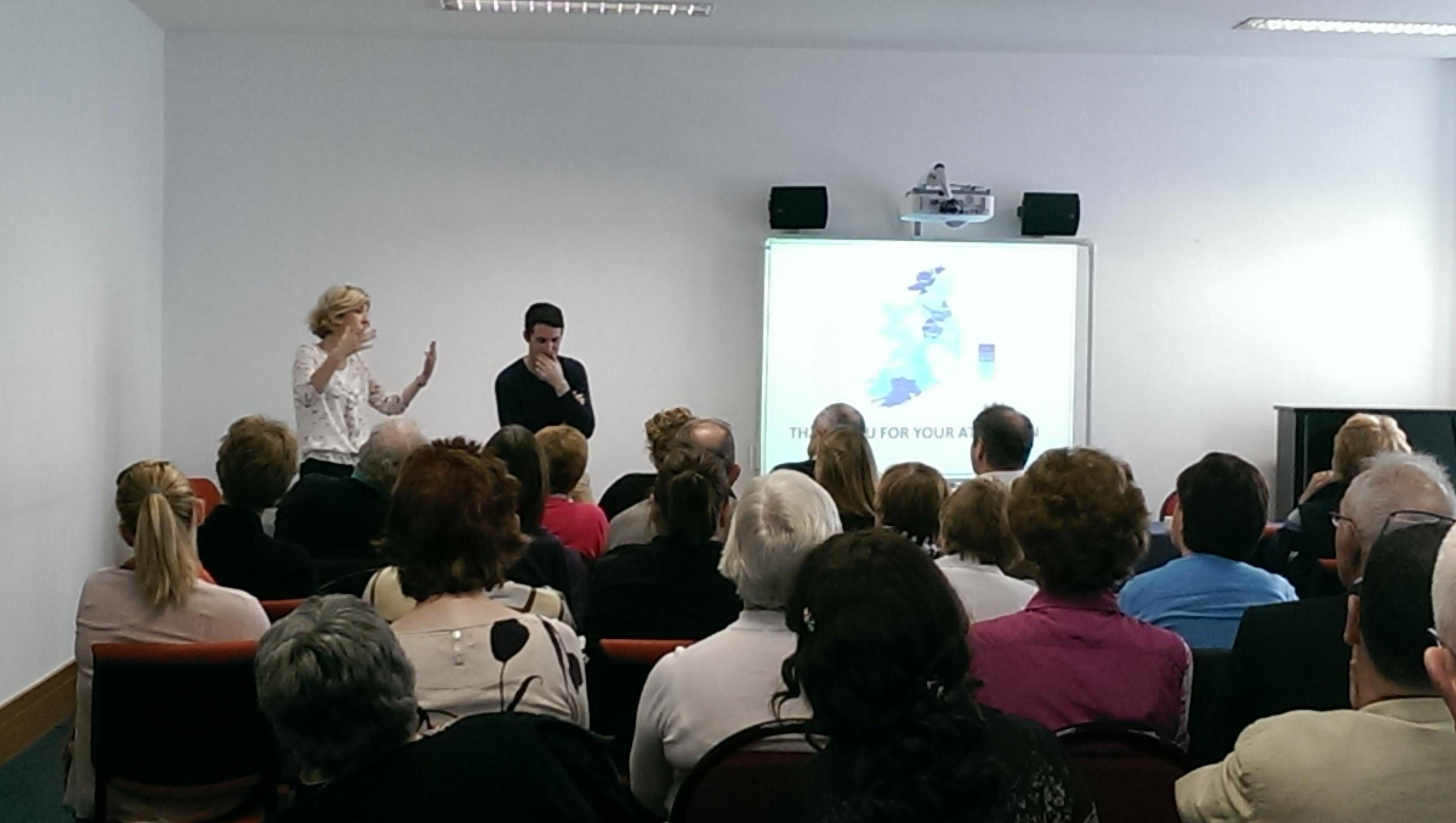 Upon arrival at the venue, attendees were registered by Patricia Ryan of the Alpha One Foundation and given a ‘pack’ which contained some Alpha-1 goodies. Following tea, coffee and scones the conference kicked off with a fantastic talk by John Walsh, President and CEO of the Alpha-1 Foundation USA. John gave a riveting talk describing his own Irish-American background and family history of Alpha-1. He also spoke about the birth and growth of the Alpha-1 Foundation in the US including the ongoing research being carried out as well as the many research links with Ireland. 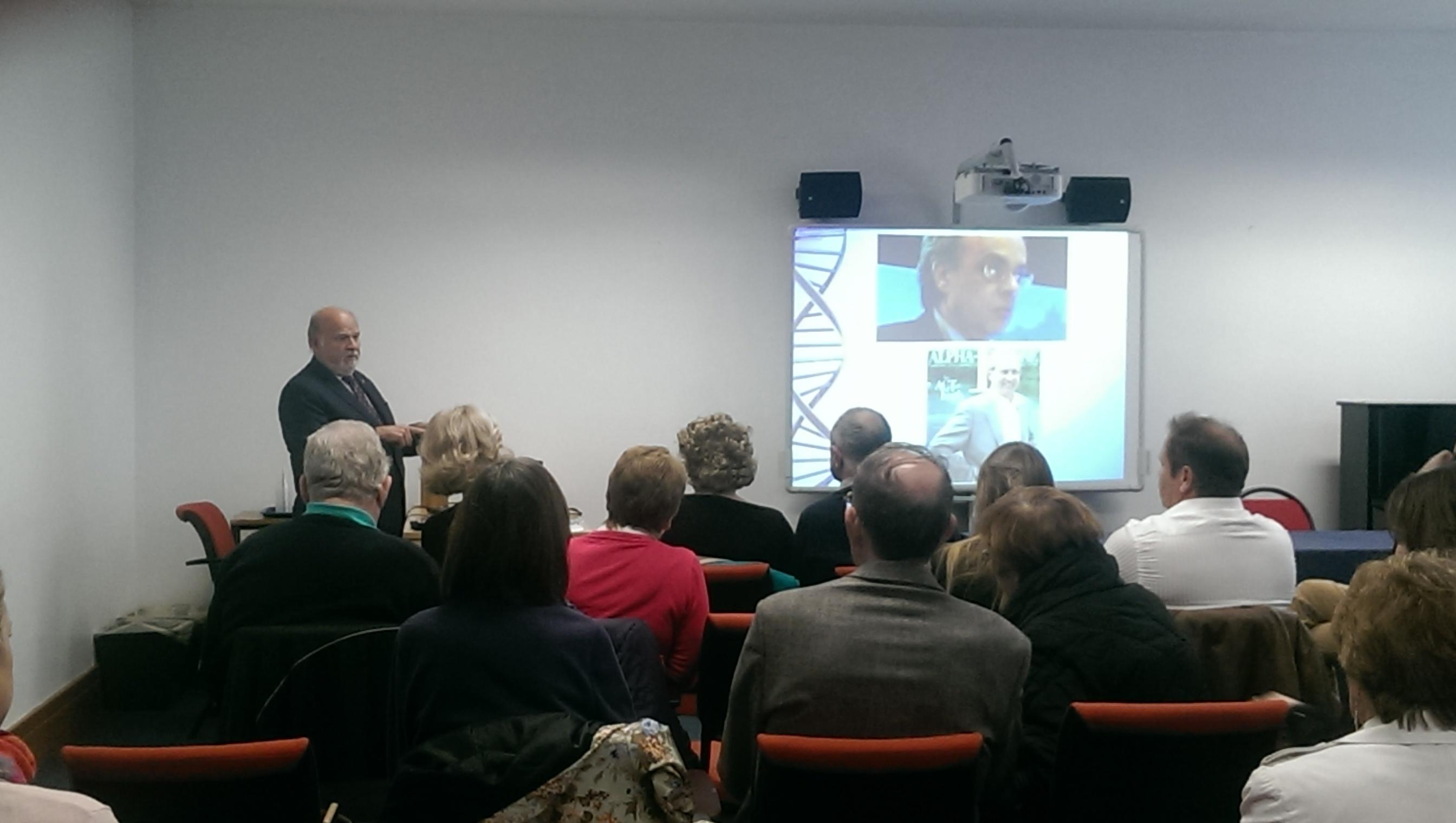 The next speaker was Dr. Kevin Molloy who works within the Department of Medicine in RCSI, Beaumont. Kevin spoke about a family study which was published this year which found that carriers of a single Z alpha-1 gene have an increased risk of developing COPD when exposed to cigarette smoke. Kevin worked on this study for a number of years meeting hundreds of families affected by Alpha-1 around the country. Laura Fee from the Alpha One Foundation then spoke about the Alpha One Foundation’s national screening programme and the high prevalence of Alpha-1 in Ireland. To date this is the only national screening programme in the world with over 30 hospitals participating around Ireland. Laura also spoke about the specialist Alpha-1 clinic and the information centre provided by the Alpha One Foundation. Dr. Emer Reeves, a senior researcher from the Department of Medicine in RCSI, Beaumont then gave an excellent talk describing the Alpha-1 research which is currently being carried out in the laboratory in Beaumont. Dr. Reeves described the importance of patient involvement in this research, when and why patients may be asked to take part in research and ultimately how this research can lead to new treatments and better outcomes for patients. In the final slot before lunch Professor McElvaney spoke about current and future clinical trials and gave an excellent synopsis of clinical research carried out on Alpha-1 to date. An energetic Q&A session followed with the audience bursting with varied and interesting questions after the morning’s talks. 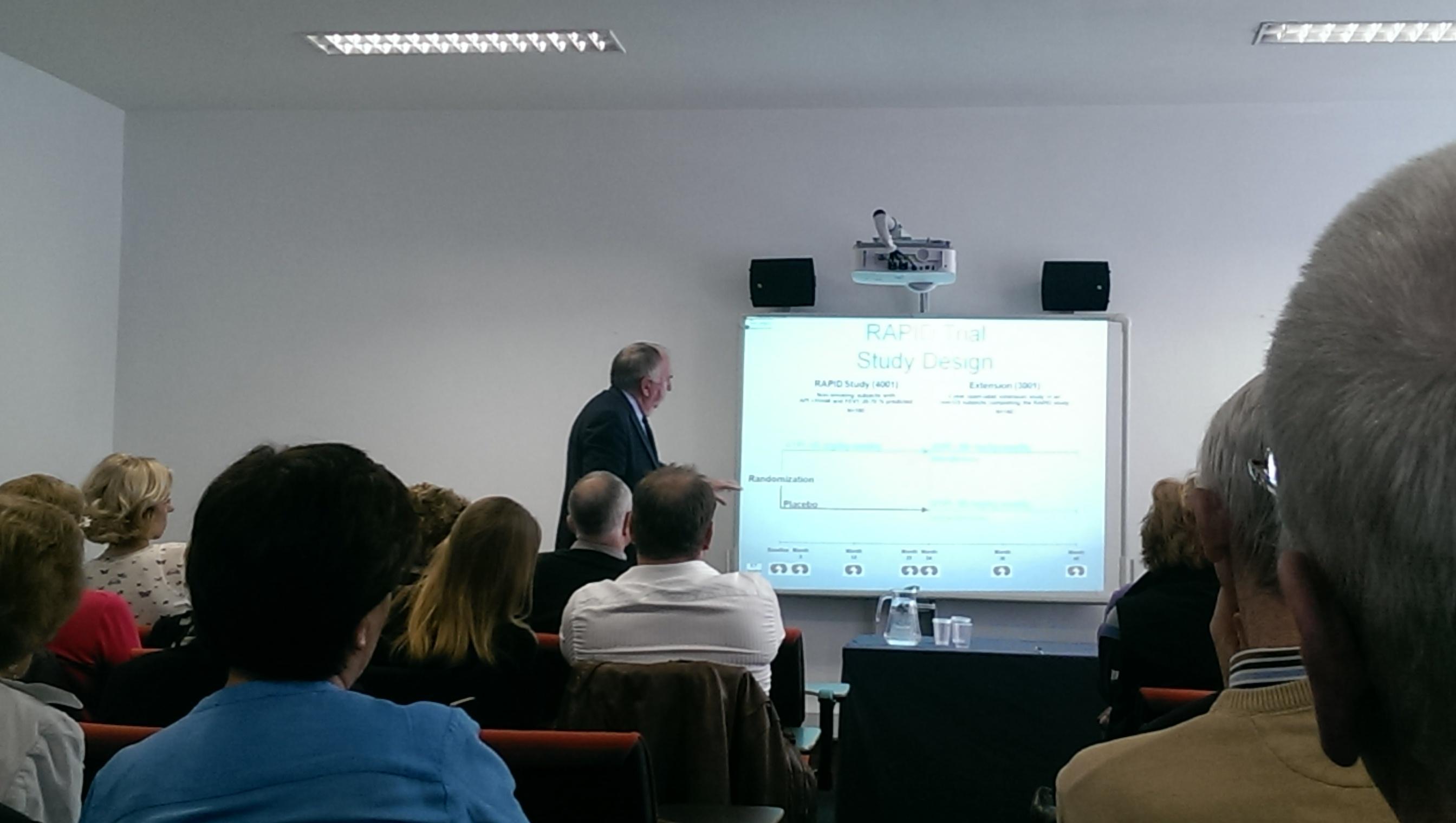 After lunch, Damien Peelo, CEO of COPD Support Ireland brought the audience through the first year of the fledgling COPD Support Ireland. At last year’s Alpha-1 Conference, Michael McGloin spoke about his work setting up a COPD patient support group in Sligo and around the country following his own diagnosis of COPD. This culminated last year in the formation of a national support body for people with COPD called ‘COPD Support Ireland’ whose roles include raising awareness of COPD in Ireland, developing a network of COPD support groups nationally, providing information and support to those living with COPD, as well as acting as a liaison with the National Programme for COPD, Primary Care and other relevant sections of the HSE. It was great to have Damien describe what has been achieved by the group since their launch last autumn including the roll out of a COPD screening campaign which took place in 5 locations across the country last November and what is next in the pipeline for them. The final speaker of the day was Michelle O’Brien, senior physiotherapist in the Respiratory Unit in St. Michael’s Hospital in Dún Laoghaire. Michelle spoke about the benefits of exercise and the excellent Pulmonary Rehabilitation programme in St. Michael’s. She followed her talk with a lively exercise session which was good fun for all involved and a great end to the day. 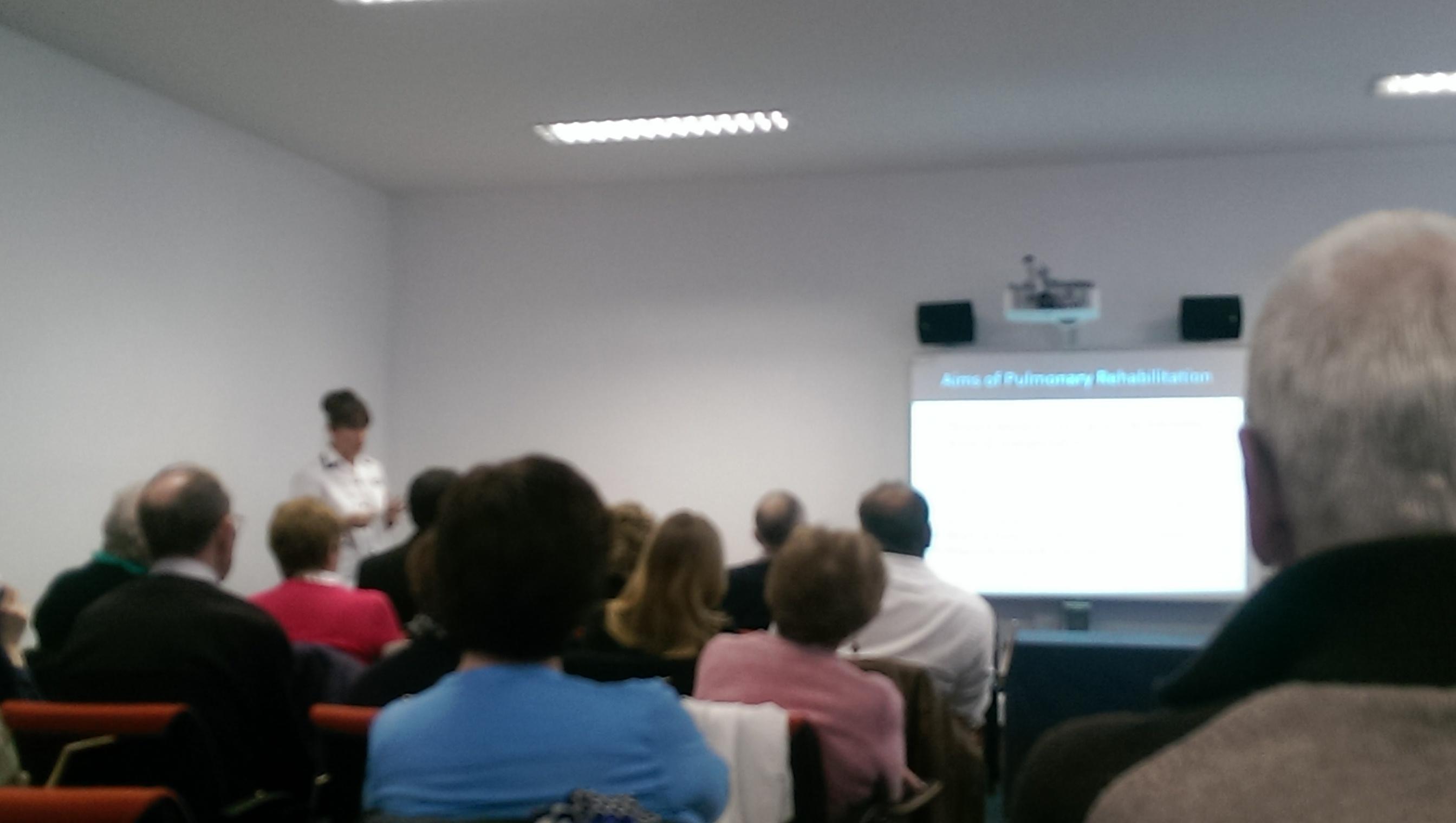 We would like to thank all our speakers who took time out of their schedules to present on the day. Of course we wish to thank all the Alpha-1 patients and their families for coming on the day and we sincerely hope you enjoyed it and learned lots. A big thank you also to the patient support group who presented a cheque to the Alpha One Foundation as a result of their hard work and fundraising throughout the year. These funds went towards a much needed upgrade of our IT system and website, a massive thanks to all involved. If you would like to organise a fundraising event or indeed a regional meeting please contact us at the Alpha One Foundation and we would be delighted to help out.

The success of this year’s conference is down to all who attended. We always love seeing old faces as well as those who have been newly diagnosed attending with their families. We look forward to seeing everyone at next year’s conference!