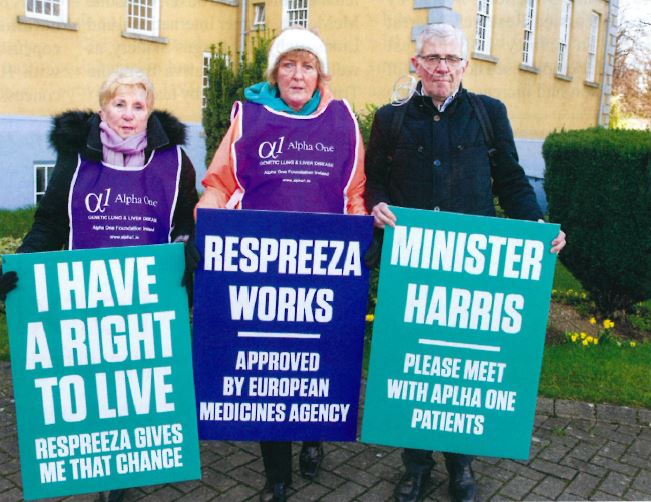 Alpha-1 patients receiving the life-changing therapy Respreeza protested outside the offices of the Health Service Executive (HSE) at the end of February to demand that the HSE and Minister commit to long-term funding of the drug. The patients said the treatment is highly effective and had changed their lives after the HSE agreed to engage in discussions with the company who supply the drug.

Respreeza is used to treat emphysema caused by severe Alpha-1, which is particularly prevalent in Ireland. 21 patients have been receiving the therapy during the past 10 years, initially as part of a clinical trial and more recently on ‘temporary’ compassionate grounds from the drug company, while a funding case was being made to the HSE. Despite continued lobbying by patients, their families and their representative organisation the Alpha One Foundation, the HSE has thus far declined to fund the treatment – as was confirmed in early February in the Oireachtas by HSE Director General, Tony O’Brien. The drug company supplying the treatment on compassionate grounds to 21 patients was due to cease supply at the end of February, but yesterday announced a stay of a further two months until the end of April.

The Chairperson of the Alpha One Foundation Professor Gerry McElvaney, CEO Kitty O’Connor and several Alpha-1 patients met with HSE officials on February 23rd to discuss the matter. Speaking after the meeting, Ms O’Connor confirmed that the HSE had agreed to engage directly with the drug company CSL Behring to see if a resolution could be reached. She welcomed this development from the HSE and encouraged that all avenues be explored. She also called on CSL Behring to lift the two month deadline and for the necessary time to be allowed for the HSE and company to engage and negotiate.

“It is the Minister for Health’s responsibility to ensure the health of our citizens. It is also important to remember this issue involves more than the 17 people in the Republic of Ireland (and 4 in Northern Ireland) who have had the benefit of Respreeza to date. What about the other estimated 40 who could potentially benefit – shouldn’t they have a chance of a better life too?

Alpha-1 patient Gerry Finnerty, who was part of the delegation which met with the HSE, said he was in no doubt about the difference Respreeza had made to his life. “I have a right to live. Without this treatment I might not be alive. This drug is necessary and is proven. It has been approved by the European Medicines Agency and is approved in eight other EU countries,” he said.

Another Respreeza user John Hannan from Cork was also in no doubt about the treatment. “Respreeza works. I would not be here today without this treatment. Health Minister Simon Harris needs to meet with Respreeza patients and hear what we have to say,” he said.

Speaking about the proven effectiveness of Alpha-1 Kitty O’Connor continued: “Respreeza is the only therapy to have been shown to slow the progression of emphysema caused by severe Alpha-1. This was demonstrated in the RAPID study which featured 180 patients and was conducted in 13 countries worldwide under the supervision of 29 principal investigators. Published in The Lancet in July 2015, the study found those treated with Respreeza saw a 34 per cent slowing down in the progression of their emphysema.

“In further research undertaken by the Alpha One Foundation, these patients on Respreeza also reported a decrease in the frequency and severity of chest infections and associated hospital admissions. Respreeza is a drug that has been approved by the European Medicines Agency and which is already available to patients in eight European countries – Italy, France, Germany, the Czech Republic, Austria, the Netherlands and Spain – as well as in the United States. The European Medicines Agency and these other countries can see the benefits, so why can’t the Minister?”

About Respreeza
Respreeza is a medicine for use in adults with emphysema caused by alpha-1 antitrypsin deficiency, an inherited disorder that can cause lung problems such as emphysema and COPD and which may also affect the liver and skin. It works by replacing the protein that is lacking in patients with alpha-1 antitrypsin deficiency and slows down damage to the lungs in patients with severe disease. It is delivered once-weekly by intravenous infusion.

To read more about Respreeza and the RAPID study click here.